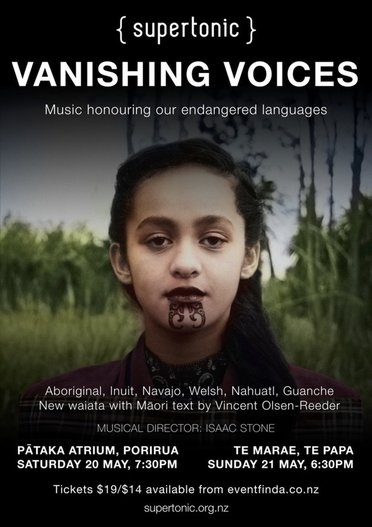 Supertonic is excited to announce its first concert series of the year, Vanishing Voices: Music honouring our endangered languages, directed by Isaac Stone.

Vanishing Voices showcases seven languages that have suffered periods of decline, through colonial invasion, assimilationist government policy and economic desperation. Each one of the world’s 6000 languages is a window into our communities, our souls and our history, yet every two weeks we lose another forever irretrievable tongue. Every language has its own unique beauty, poetry and cadence, and deserves to have its story told and its people heard.

Aotearoa has our own beautiful and endangered language in Te Reo Māori, and the centrepiece for the concert is a new setting of music written as a collaboration between Supertonic, its director Isaac Stone and young Māori scholar Vincent Olsen-Reeder. Vincent has provided his beautiful original poetry in Te Reo to form an all-new song cycle, to be premiered by Supertonic in Vanishing Voices. In keeping with the theme of empowering Māori youth, the concert will be hosted by two Māori rangatahi: Marama Butler and Kaylim Poese-Nathan, both Year 12 students at Tawa College.

Now in only its fourth year, Supertonic has cemented its place amongst Wellington’s thriving musical community and is known for combining accessible, provocative and enjoyable concerts with a rich, vibrant and immersive sound. The choir believes that strong friendships, trust in one another, and building enduring relationships is what creates special music for both its singers and its audiences. By honouring our endangered languages through the universal language of music, Supertonic hopes to present its most thought-provoking and captivating concert yet.

Waged $19 / Unwaged $14
Supertonic thank the Wellington Community Trust whose support made this concert series possible. They also acknowledge and thank Trust House for their assistance in taking this concert to Porirua.​
© COPYRIGHT 2020.  ALL RIGHTS RESERVED.